Statue of General Sudirman or Patung Jenderal Sudirman is located on Jl. Jend. Sudirman, Dukuh Atas, Jakarta Pusat/Central Jakarta. This statue has a height of 6.5 meters and a buffer with 5.5 meters high. The statue was made of bronze weighing 4 tons which was done by artist and professor of art Bandung Institute of Technology, Sunario. The statue construction is planned in September 2001 and as the realization of a hero sculpture contest in 1999. The statue cost about 6.6 billion rupiah and the fund come form the company, and to compensate company, the government give the company two billboards points in strategic locations, Dukuh Atas. The inauguration of the statue was held on August 16, 2003. The position of this statue has drawn controversy since it was established, as described Sudirman was in saluting position. As Military Commander Gen. Sudirman did not properly respect to any citizen who crossed the road, which are supposed to respect him. This issue was also raised in the film Nagabonar 2 by director Dedy Mizwar. Unfortunately you can not take a picture with the statue of Gen. Sudirman as the background, unlike the Statue M.H. Thamrin. 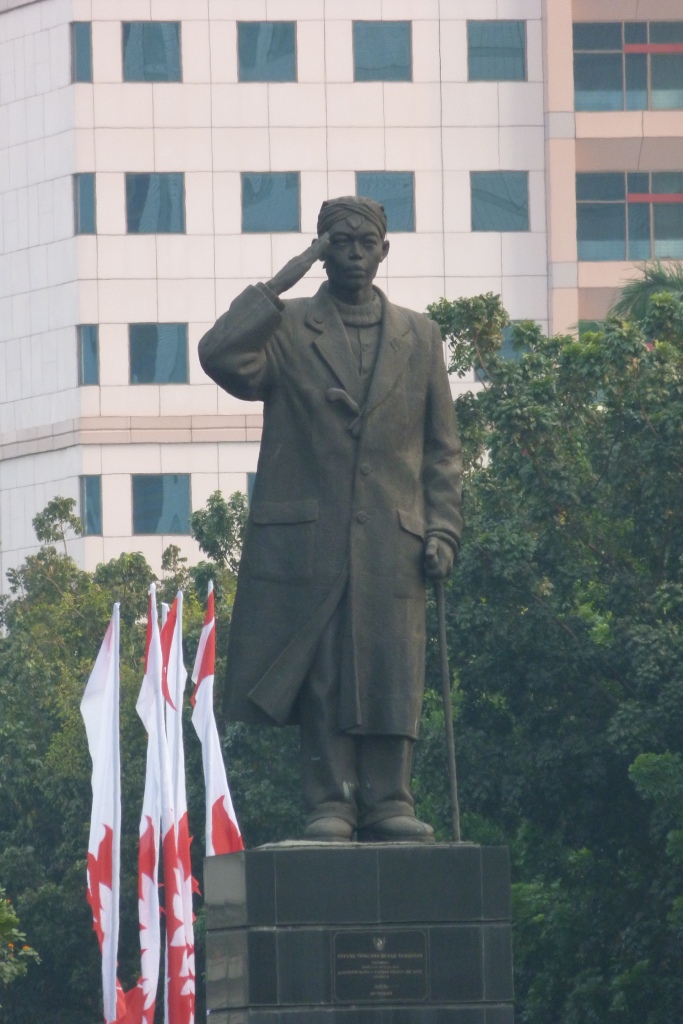 General Sudirman was the First Commander of the Tentara Keamanan Rakyat or People’s Security Army (now TNI) and led the guerrilla forces during the independence war. He was the first and the youngest General of Indonesia. He has been a General at the age of 31. On 12 November 1945 at the first Conference of TKR he was elected Commander of TKR / Armed Forces of the Republic of Indonesia. When the second Dutch military aggression, and Yogyakarta fell into the hands of the Dutch military. The President and the Vice President and several cabinet members chose to surrender and were captured by the Dutch military. Gen. Sudirman chose to continue to fight and launched a guerilla warfare against the dutch on crutches with his troops. He moved from jungle to jungle for seven months with heavy sick and weak and in a situation with almost no treatment and medical care

From Tanah Abang go to platform 3 and take the Yellow Line heading to Depok/Nambo/Bogor and stop at Sudirman, and take a minute walk to East

See the link map or the map below