Along with the increase ticket price of Rp. 2000, PT Kereta Commuter Jabotabek launches women-only trains. The series consists of eight carriages were just carrying female passengers. The Women only Commuter Line is operated at Red Line and Yellow Line

According to the Communications Manager of PT KCJ, Eva Khairunnisa, as reported by Vivanews, she said that a special train for women intended to improve services to Commuter Line users in the Greater Jakarta area, and as a form of concern for women passengers. But Nurcahyo, spokesman for KRL Mania, as reported by Vivanews, criticized the program he stated that there is a benefit despite the urgency of interest. He considered that it would be nice if the addition of a series of women-only train were made to the existing train. That way, the density of passengers at peak hours can be slightly reduced. There are also two special carriages for women in each corner of the Commuter Line Train. Nurcahyo also said there was never any demand for women’s only Commuter Line train either on the mailing list, Facebook, and Twitter. 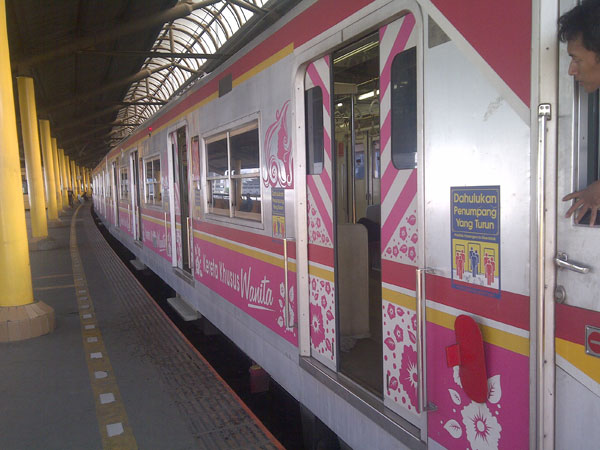 This is Women only Commuter Line Schedule: