If Jakarta currently has a TransJakarta as promoted as the backbone mode of transportation, previously Jakarta also had a mass transport: horse tram. Horse Tram became the most popular public transport at that time. Horse tram is a long train that can load 40 passengers, runs on the tracks and pulled by four horses. The horse tram was inaugurated on August 10, 1867. Horse trams began operation on 20 April 1869. Horse tram are avaliable on every five minutes and operates daily from 5:00 a.m. to 8:00 p.m. at the rate of 10 cents.

The first horse tram route from Amsterdam Poort (now Kota Intan) – Binnen Nieuwpoort Straat (Jl Pintu Besar Utara), then down to Molenvliet (Jl Gajah Mada-Hayam Wuruk) and ends at the Harmonie. On June 1869, horse tram route added from Harmoni to Tanah Abang and some are heading to Rijswijk (Jl Veteran) – Kramat – and ended up in Meester Cornelis (Djatinegara). The horse tram was operated by Bataviasche Tramweg Maatschappij (BTM).

Horse-drawn tram operations face many problems such as high taxes on horse, on 1872 there were 545 horses were dead, the horse should be assisted buffalo on the uphill road, bad financial management. On 19 September 1881, the horse trams were started replaced by steam tram. The carriage no longer drawn by horse but drawn by the locomotive boiler. Steam tram company was Nederlandsche Indische Tramweg Maatschappij (NITM)

On January 6, 1887 the horse trams history was ended. It was ended due to the poor management of the horse tram. Eighteen years after the steam tram victories, in April 1899, Batavia Electrische Tram Maatschappij (BETM) began operating electric locomotive tram. The electric tram operation in Batavia was earlier than the Dutch. The Dutch was operated new electric trams on Haarlem-Zandvoort in July 1899.

The History of electric trams must come to an end in 1960 when President Sukarno ordered the cessation of operation of the electric tram to be replaced with the Jakarta Metro Subway. 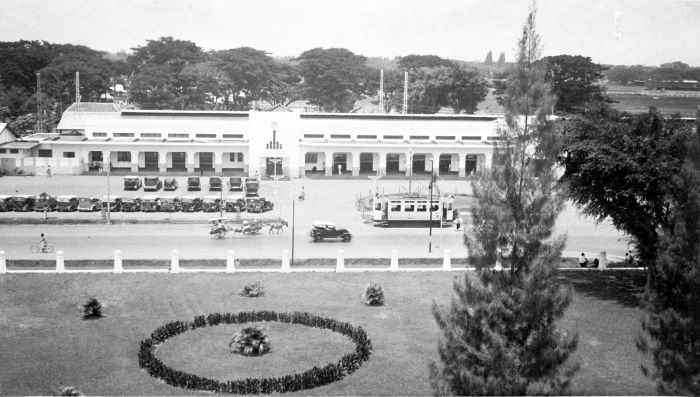 The Tram Route in Batavia were